What to feed starving caterpillars? The question everyone asks when their Swan Plant has only a few leaves left and no larvae are ready to enter pupation. Well most people do a Internet search and find there is not any good single page on this topic. Ahhrrgg, now what?

Well, search no more, it's all below.

Butterfly weed (Asclepias tuberosa) can be grown in New Zealand, but it can't be imported for fear of it becoming a invasive weed as it spreads by underground roots. So this is a rare plant in New Zealand, not helped by the fact it won't seed that easily.

Beware of any sprayed plant, however you obtain it.
All sprays will cause your larvae to die, sometimes within a few hours, but other times after the imago emerges from the pupa. Watch out for vomiting soon after introducing the larvae to a new plant as this will show there is problems. Ideally wash or hose the plant first, including the undersides of leaves and stems. Place out of reach for 24 hours or until dry if it's needed urgently. Systemic sprays can't be washed off easily and the plant needs a minimum of 4 weeks to purge itself of these chemicals. These are the type with kill the butterfly after it emerges from the pupa.

Tweedia will sustain a hungry larvae, but they will go for the flowers, buds and seed pods first as they don't initially like the fluffiness of the leaves. However they will happily eat the plant bare. I have also recorded ovum being laid on Tweedia, so it obviously passes the chemical suitability test. I have never reared larvae from ovum on Tweedia to see if it has any detrimental effect on their development. However they have no problems from the 3rd instar onwards, this is about 1" or 25mm long. 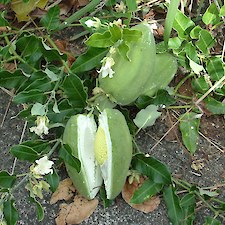 This plant has several names including Moth Plant, Cruel Plant, Kapok and Milkvine. It is known for its flowers trapping butterflies and Moths, hence the name of Cruel Plant or Vine. This is a garden escape that is now on the noxious weed list, so can't be grown, however you can relocate your starving larvae onto a vine. Technically you are not allowed to move any part of the plant, but if you are taking strands to feed to your hungry larvae. I very much doubt much will come of it. However watch that it is not sprayed by a landowner as this will cause your larvae to die. This plant has large leaves, which poses problems for the larvae when they nip the stem of the leaves as the wind will catch them and rip them off. I have never reared larvae from ovum on Moth Plant to see if it has any detrimental effect on their development. However they have no problems from the 2nd instar onwards, this is about 0.75" or 18mm long. Pumpkin fruit
(Cucurbita spp)

NOT RECOMMENDED due to deformities

This is a last resort food as it can only be fed to 5th instar larvae (this is about 1.75" or 40mm long). This is because it doesn't have the chemicals they need to successfully metamorphose into a butterfly. People report varying results and deformities using Pumpkin.